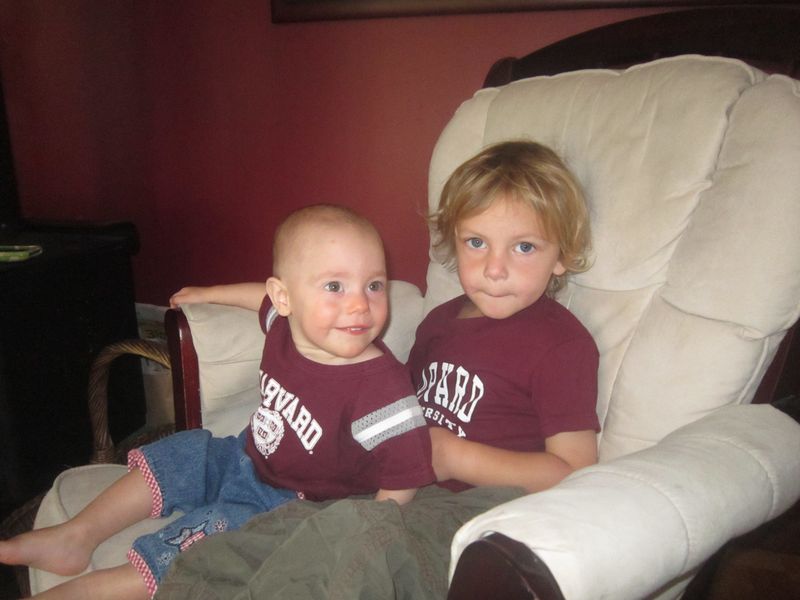 Yes, those are Harvard T-shirts. Hey, it could TOTALLY happen.

Maria! At sixteen months, she is a little over 18 pounds and 29ish inches long. For her adjusted age (that is, 14 months) she is at less than 3rd percentile for weight and 16th percentile for height. The actual conversation I had with the pediatrician went like this:

Him: "Well, her frame seems small, so I think she just might not end up being a very big person." (Pauses) "Remind me how big your husband is?"

Me: (Thinking back to our 2005 trip to Thailand, where the locals stopped him on the street to point and laugh in delight.) "Um, big."

Him: (sighs, closes eyes, shrugs) "Well, whatever, she seems fine."

There you go. She does seem fine. Keeps picking up new words. Still loves her stuffed Pablo ("Pah-boooo!") Today she crawled up on to the back of the couch, over the shelf to the kitchen, reached into a bag of bread and grabbed herself a slice, then plopped down next me and started gnawing on it. Seriously, she eats like a horse. She also uses all manner of sippy cup and can be regularly spotted breakfasting competently with a fork!

Among her more charming habits is her method of getting me to read to her, in which she picks up a book and hits me repeatedly with it until I give in.

She's taking five or six steps at a time, but is still mostly a floor dweller.

The boy is becoming downright chatty, at least by Kurt standards. Comments on the color of the sky, for pete's sake! Greets taxis and firetrucks on the street like they're old friends. In fact, since he started watching the movie Cars, he strongly associates people he knows with the car he regularly observes them in. So when we left our neighbor Val the other day, he cried over his shoulder, "Bye, Val Red Car!" When we visited the little girl across the street, it was "Hi Danika Blue Car!" I'll take it.

He points out his Grandpa (and other people) in pictures. He puts on his slip-on shoes by himself and is finally and for real drinking out of regular cups, using a fork, asking for a napkin, and giving his sister honest to goodness kisses. Don't know if he'll ever spontaneously say "I love you" or "Why?" but I'm surprised at how little it matters now.

Maria painted today for the first time. Some of the paint even got on the paper.

But not as much as you'd think.

Eventually, she figured out the real action was over at Kurt's easel, so she toddled over there to help him. 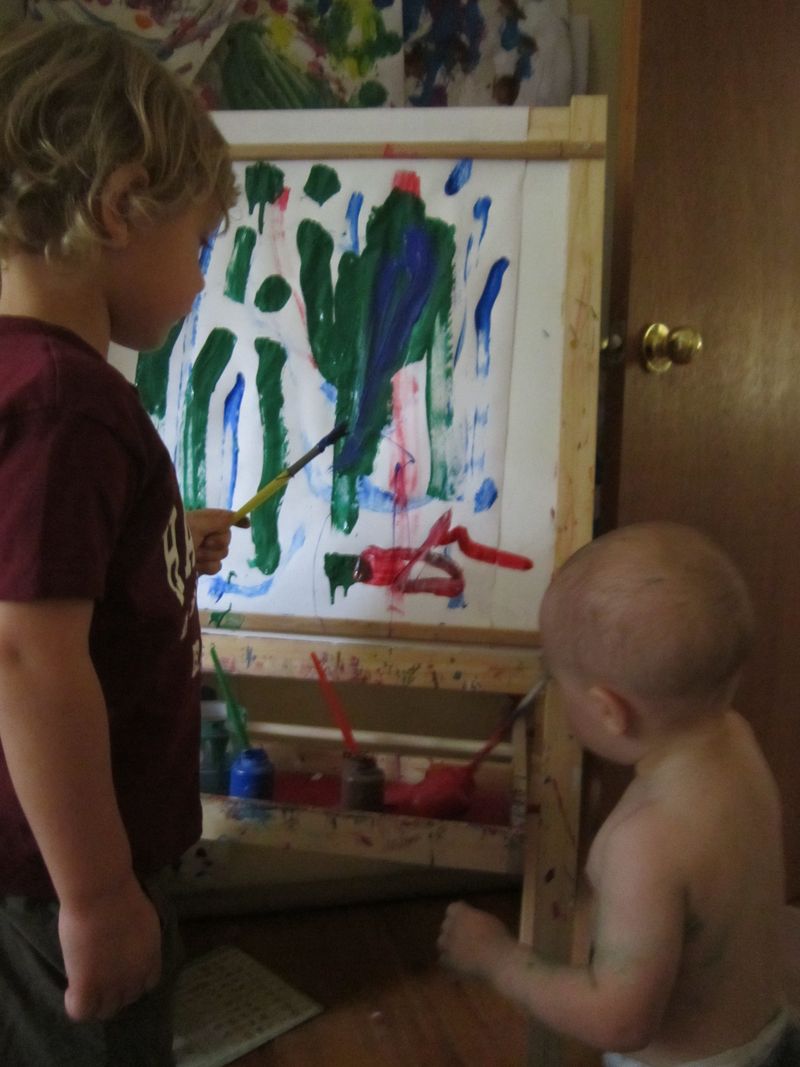 6 thoughts on “A Proper Mess”