First of all, my wonderful niece Sawyer inexplicably turned eight today, and before any of you smart asses write me to tell me that it's all about the earth revolving around the sun, let me assure you that inexplicably is a figure of speech.  When people that you remember as little babies grow up enough to have opinions and swim meets, it means you're getting old too, and that's the weird part.  How Sawyer can be eight when I am obviously only fifteen is what I can't figure out.

From the wondrous land of Tofino came home with us a truly heinous bug, first taking Kurt down and then taking Jeff even further down. Jeff doesn't get sick very often, but boy howdy, it was gross, and that's my professional medical opinion.  As Jeff began to descend at the beginning of the weekend, Kurt seemed better, so I took him to the nearby playground, where he quietly swung and played on the enormous frog and gazed at the other families before crawling up to the top of the tall slide and puking his guts out. Everyone saw, so it's not like I could pretend it wasn't my kid who befouled the slide, and there was nothing left to do but walk him back home and hose him off. Fortunately, this is Vancouver Island, and on Sunday it started to rain again.  By Tuesday it was like there had never been any puke at all.  I really looked.

This was but a bump in the road for our little guy, who has been doing beautifully. Observe him in his quiet dignity: 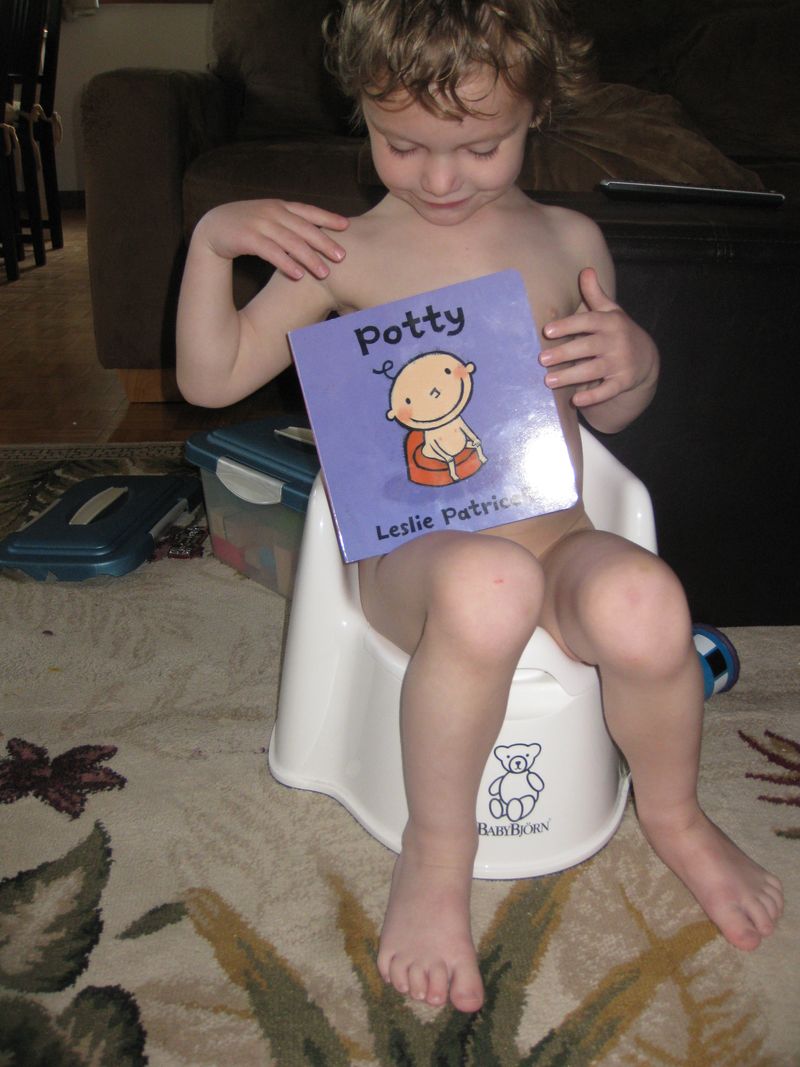 Yes, we're trying to potty train him.  How's it going?  Oh, it's not. For a while the sight of his mini potty caused him to burst into tears and hide.  Now, with the introduction of the above featured Potty book and a large number of chocolate Easter eggs I got on clearance, he can be coaxed to sit for a short time, but nothing happens. This, despite his intense love for said Potty book, which he "reads" often out loud to us. (The reason I know he's faking it instead of really reading it is that I ad lib quite a bit when I read to the kids, and he recites my made up lines, too.)

In the "challenges"column we can also include the fact that he can no longer be left alone in a room with his little sister, because he will push her down, or over, and laugh heartily about it.  It's maddening.  Sometimes I yell at him before I can stop myself, which the parenting experts tell you not to do, and which occasionally will cause Kurt to ask me in his sing-song voice, "Are you angry?" (an expression he picked up from his How Are You Feeling book), like a little Vulcan trying to grasp my confusing human emotions. Of course, a minute later he'll come over and snuggle up to Maria like nothing happened. "Good boy," he'll say, patting her head affectionately.

But when he's not resisting toilets, fake reading or trying to murder his sister in cold blood, he's painting.  Kurt loves to paint. Santa brought him all manner of painting supplies at Christmas and he's running through them madly. "Do some painting?" he asks in his little hopeful voice. When I acquiesce, he'll command, "Brushes!" When brushes and paints are brought to him, he'll eagerly choose colors, waiting for me to put a brush in each bottle. "Here's some green on the paper!" he'll exclaim triumphantly, after a brush stroke. 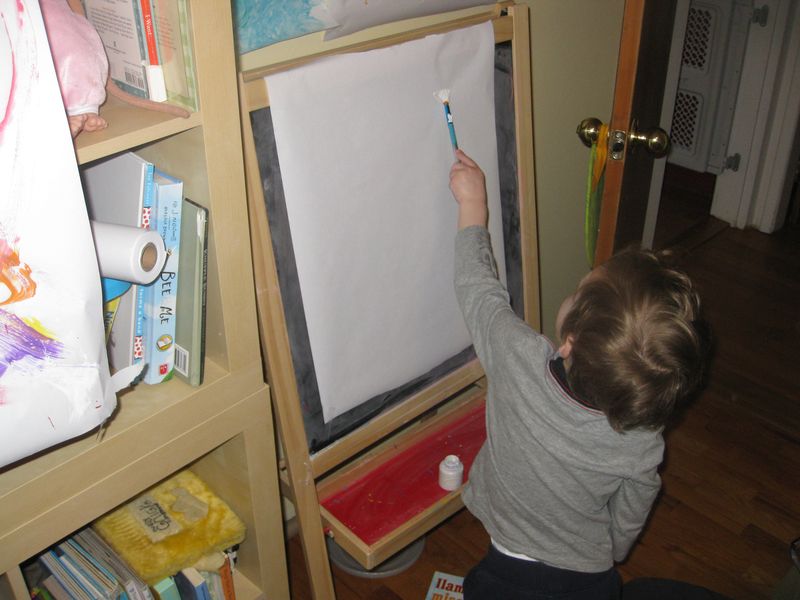 A typical painting a la Kurt: 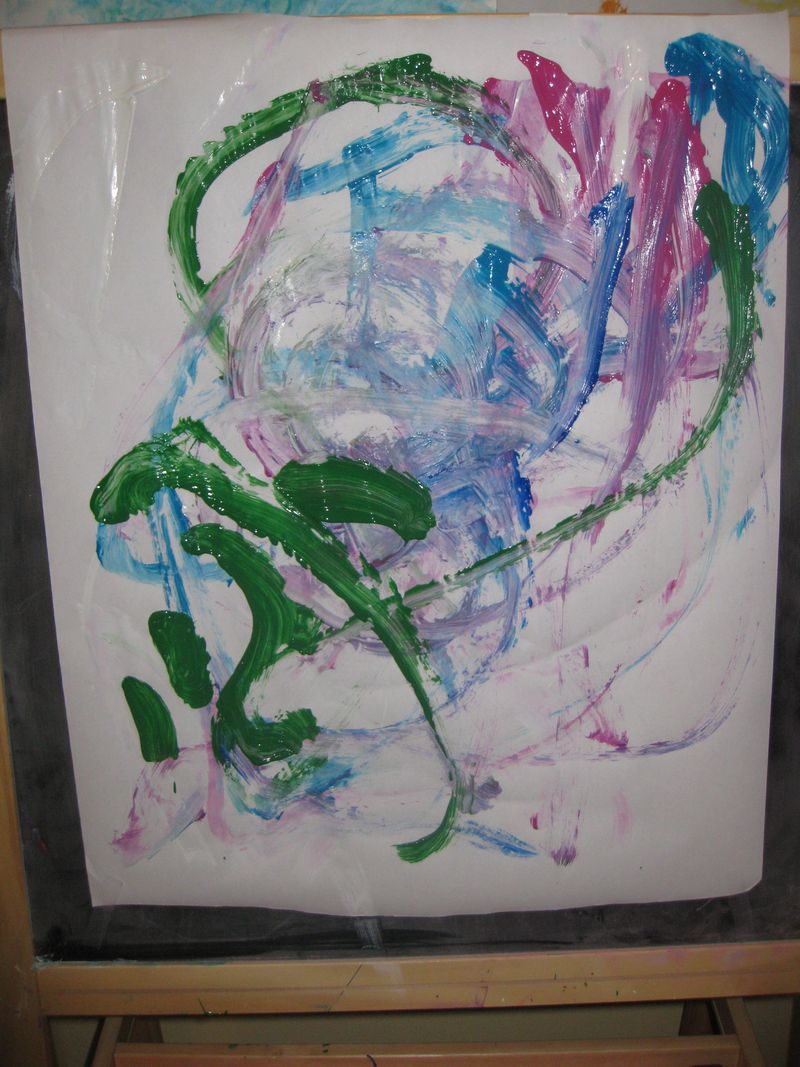 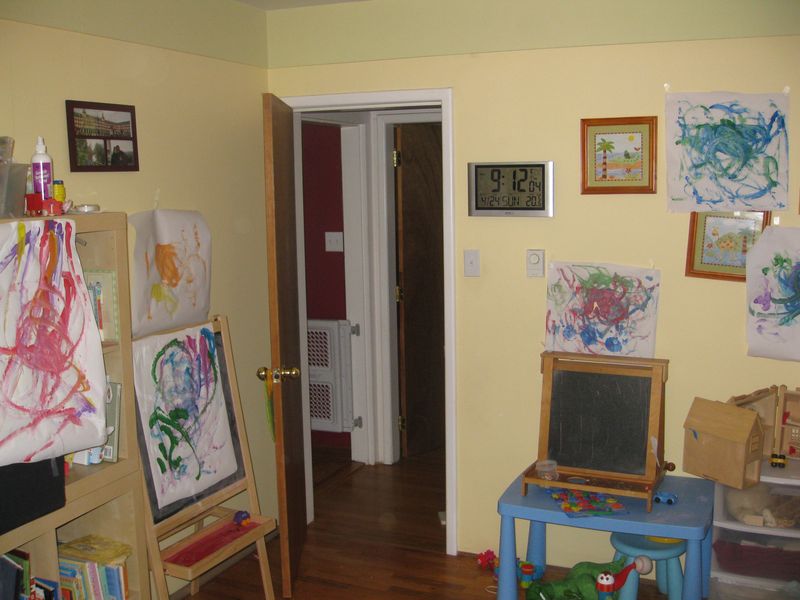 I haven't blogged my about my recent search for a preschool, because it was stressful and depressing. It has generally been agreed upon by Kurt's Team of Ladies (occupational therapist, speech path, behavioral consultant, interventionists) that he'll need an aide to go to school, and the search for a place that 1) was a good fit 2) had a place for him 3) would take him with an aide 4) was affordable was disheartening.  At first I had a co-op preschool picked out for him, which is one of those places where parents volunteer frequently and help run it. Parental involvement, I thought, Yes! I'm a parent! I'm involved! This is going to be great!

But, dude, don't you enroll your kid in preschool hoping for a break? I mean, the last thing I'm aching for is more three year olds to look after. There were other factors,too, and ultimately I opted out. I was starting to despair when I went on a tour of a place downtown, and though I was told to not hope for a space for Kurt, I was so impressed with it I got Maria on the waiting list for 2013, just in case.

But the preschool gods are a capricious lot, and so I am happy to say Kurt will be in attendance at Downtown preschool in the fall for two days a week.  Wish us luck, because we are going to need it.

The hardest part of preschool? No nut products, and thus no debonair Nutella mustaches: 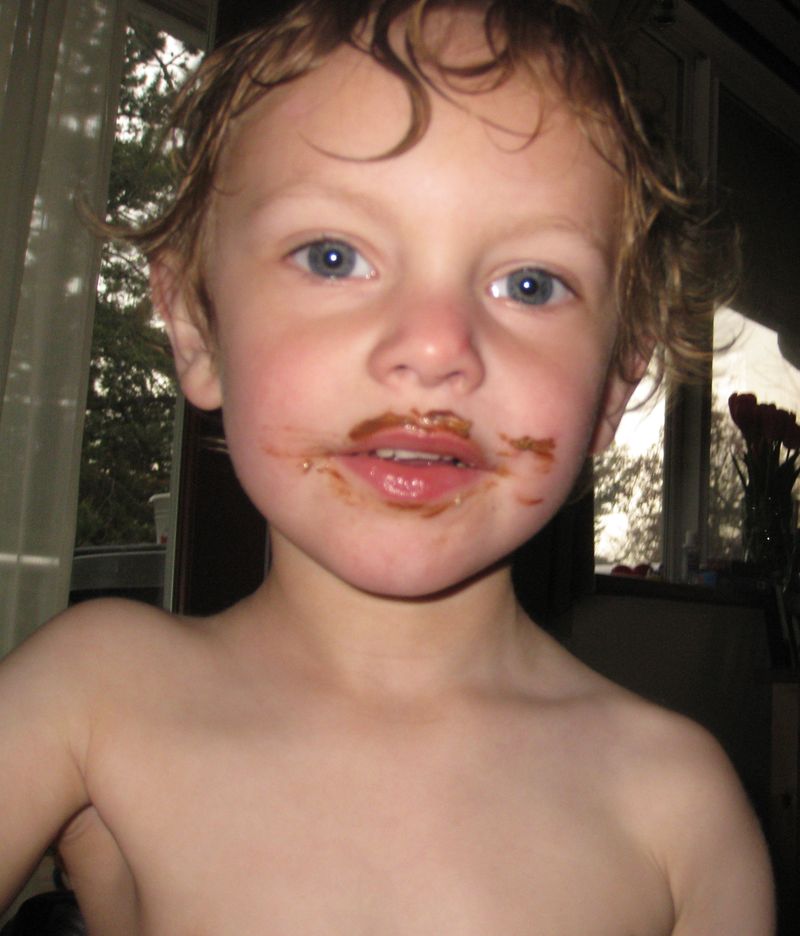 But we'll muddle through somehow.

Kurt found his baby piano the other day and has been playing its four keys madly ever since:

And how was your week?

3 thoughts on “Kurt In The Time Of Cholera”