I was sitting here on the couch in St. Louis today, thinking Hmmm, don't I have, like, a blog, or something?  I wonder how long it's been since I added an entry….  So, I checked, and, holy crap, it had been two weeks!  Here's the scoop.  We went on a long trip to visit family.

Knowing it would be more than two weeks away from home, we boarded the cats for the first time ever.  I had a hard time looking the cats in the eye the weekend before we dropped them off, and I think I may have petted them a bit too much, because they gave me mighty suspicious glances that Monday morning before I, ahem, totally abandoned them to the care of strangers.  I have no clue how I'm going to be able to suck up to them for a sin of this magnitude.

The plan was to visit family in the greater Seattle area, but before that, we caught the ferry to Vancouver to register Maria as an "American born abroad," a task which felt strangely important and official, and of course, is.  The getting on a boat to go the nearest major city and the having to appear in person with one's marriage certificate and proof of familial relation contribute to a "citizen of ancient Rome" sort of feeling about the process. ("This is Maria, begotten of Jeffrey of St. Louis, and Jayne of Sacramento…") The gravitas was dispelled when Kurt, having been pulled from his bed several hours too early for this shit and suffering from a total lack of amusements, as we were not allowed to bring any, made the U.S. Consulate General and indeed most of downtown Vancouver aware that he was not impressed and that he wanted to go, go GO!  After our civic duty was done, we went.

Here he is that morning, during the lovely ferry ride….

After that, we spent a few days in Tacoma. We visited my mom in the nursing home where she is, again, after she broke her ankle and dislocated her knee some weeks back.  This was actually not the first time my Mom has met Maria, as I snuck her down there for a one night only stop last month.  Mom and Maria get along very well. 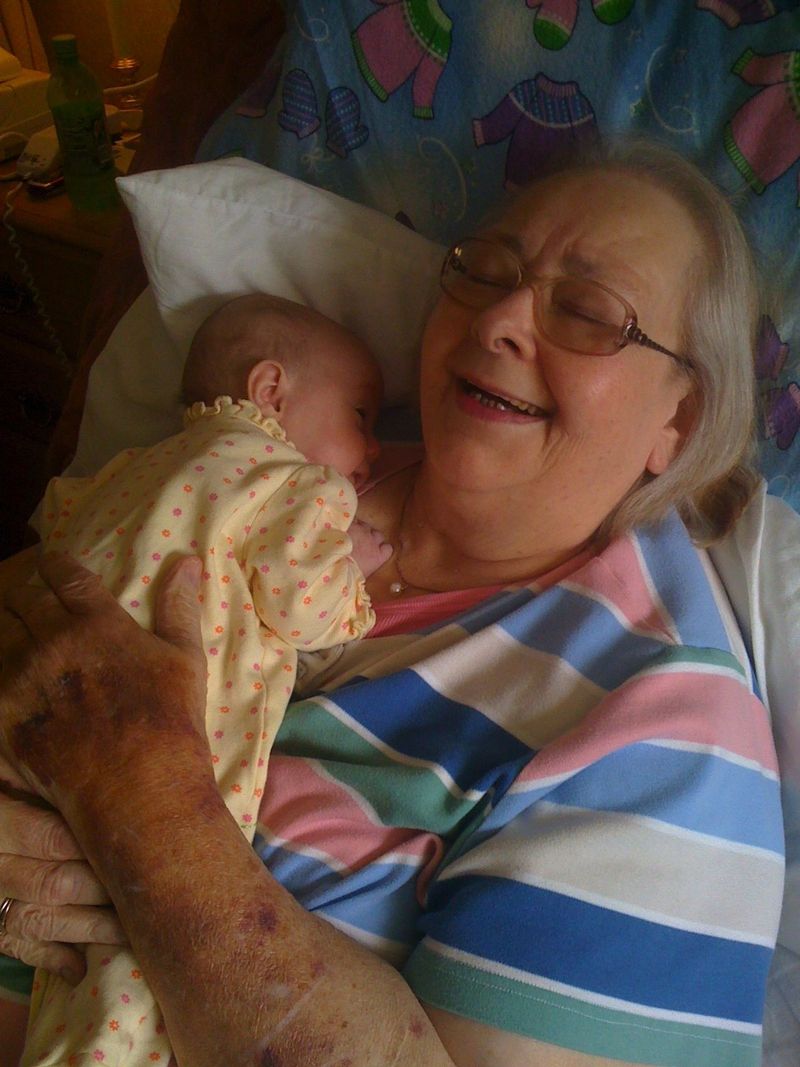 Her arms were only strong enough to hold her grandbaby for a few minutes at a time, but she really enjoyed it.  These are tough times for my mom.  She looks pretty good in these pictures, but she's out of resources, and I don't just mean money.  She's in a lot of pain.  It's hard to move around.  She's exhausted all the time.  As a result, she just doesn't have a lot of energy left to take my or your needs and lives into consideration.  She can't remember little details, she can't remember how she used to act around you, or what your worries and hopes are.  She really tries to make conversation despite feeling crappy, but it doesn't always make sense and it isn't always appropriate.  Plus, her memories are unravelling as older people's memories often do, like an afghan, with the most recent stitches first.  Sometimes I have to fight the feeling that she's being insensitive or selfish when I have to remind her of simple or obvious things about my life, and then I remember that she wasn't always like this, and how she got like this doesn't really matter anymore.

We saw my brothers Rusty and Marty, the latter of whom I got this neat picture of in his black berry filled yard (he's in a beard phase):

Aunt Stephanie held Maria AND managed to engage and amuse Kurt by chasing him and feigning an interest in rocks and wheels: 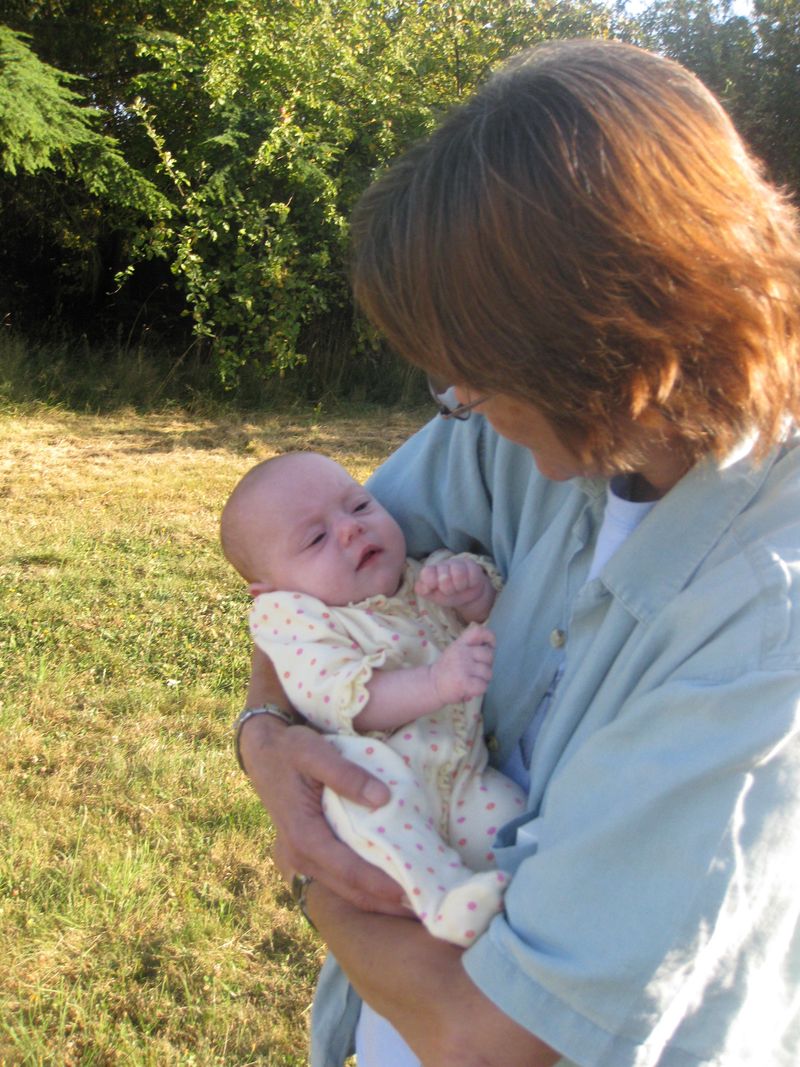 Before we left Washington, we were treated to a fab night at the Rueters' house.  I ate borsht, which I think was a first, and which I liked, and grape pie.  (I also got to take a bath in Amy's glorious huge tub and later use her rain shower.  Visiting this house is like a spa trip!)  Amy introduced Maria to her babies Anya and Eva, who aren't really babies anymore, and then to her BABIES, otherwise known as her dogs:

And then it was on to St. Louis!  Grandpa Bob and Maria are very, very sweet together… 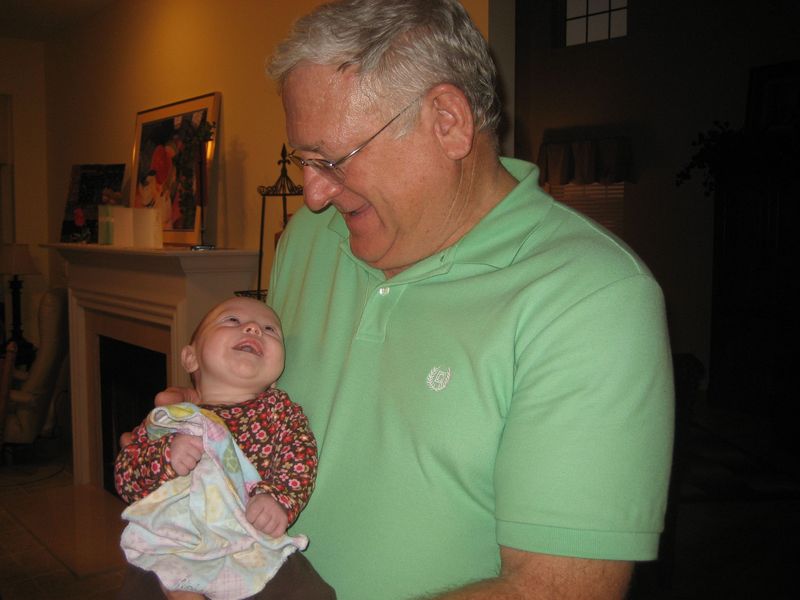 Maria has already had her first visit to Steak N Shake.  This is important stuff, people.

When not gazing sweetly into people's faces or screaming in her car seat (she HATES her car seat), the girl is content to sleep on people… 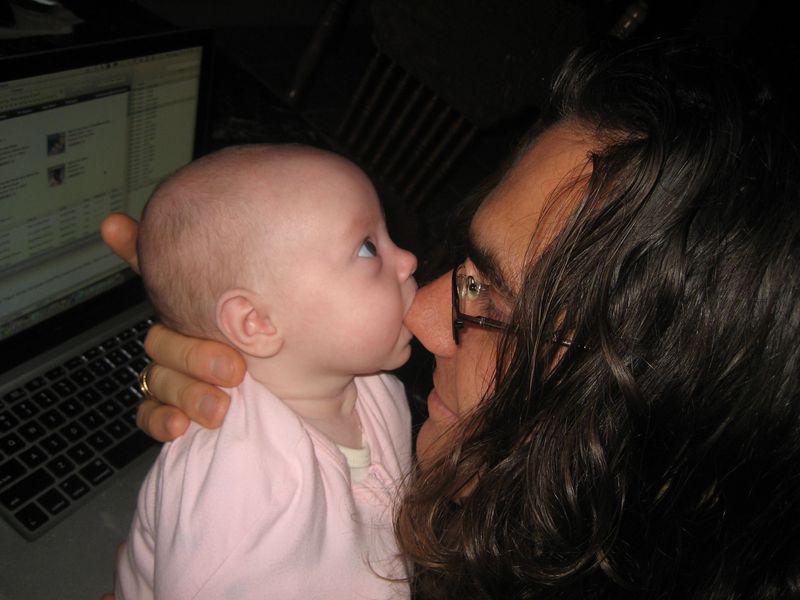 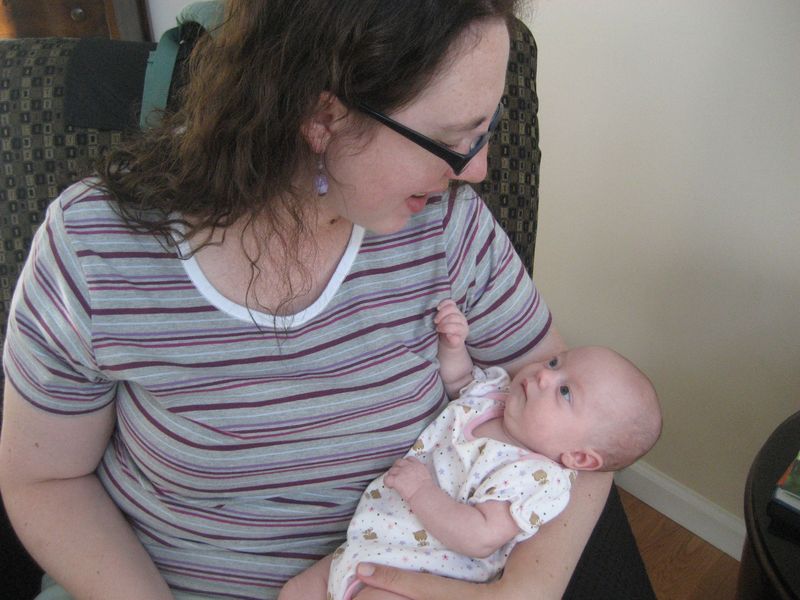 And as for Kurt, he is having the time of his life.  He was merely crawling when he last visited his grandparents' house, and did not yet know the current joy of three floors of stairs to stomp up and down whilst counting to ten (minus six, seven and eight),and the many, many light switches, and the ceiling fan in every room.  Plus there have been playgrounds! 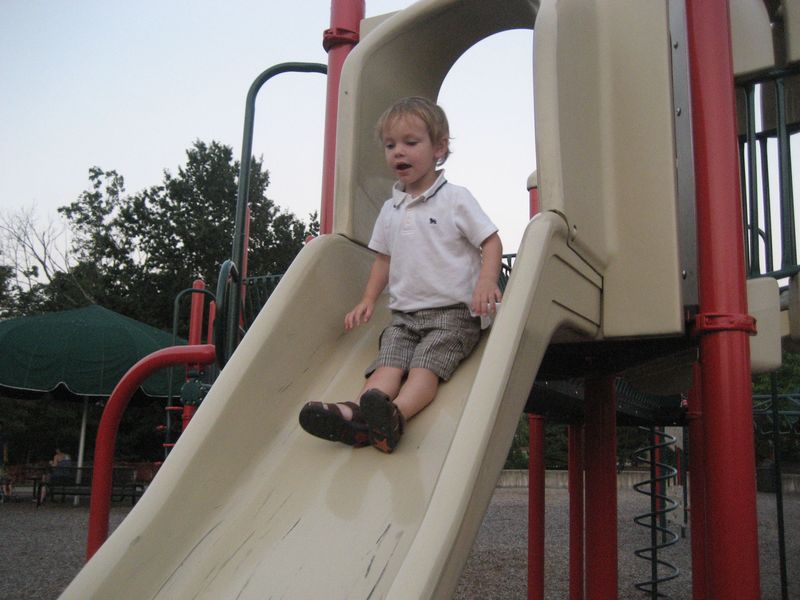 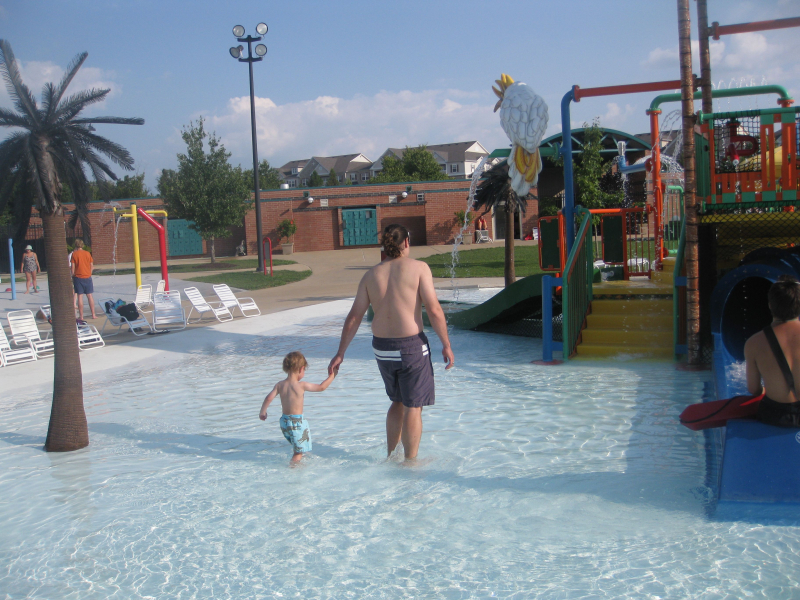 (That's Jeff triumph-ing at the bottom of the water slide below.) 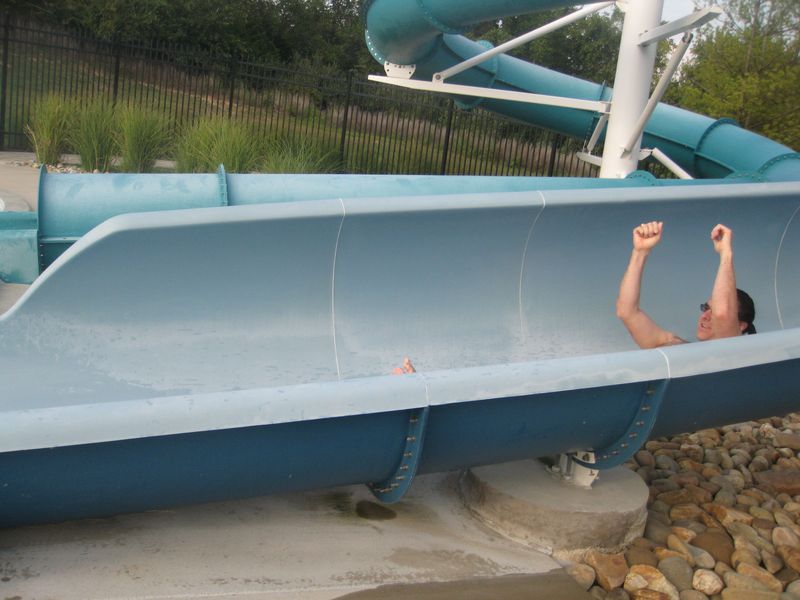 …and Creve Coeur Lake, a Daddy's Childhood Historical Site, which has rocks! 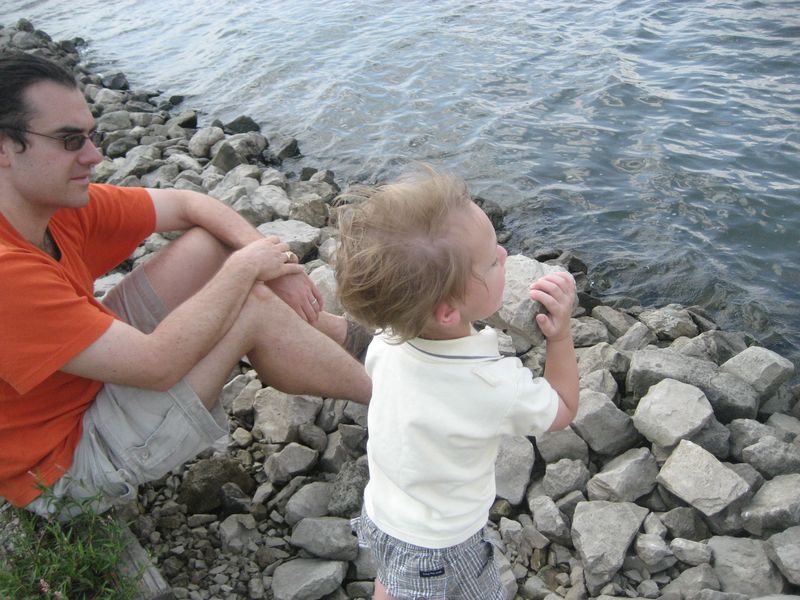 But the best thing so far for Kurt has been the Magic House  (incidentally, another Daddy's Childhood Historical Site…), which, and I believe I do not exaggerate here, is the most awesome place that has ever existed at any time here on the planet. The sweet spot for visiting is probably when your kids are somewhere between seven and eleven years, and you could easily spend an entire day there.  But even with a two year old, there was plenty of cool stuff to see.  Like a display of balls seemingly being suspended in mid-air to demonstrate the Bernoulli principle.

Or a ramp display where a kid of Kurt's persuasion could roll a ball through to make music.  Or a giant string wheel that makes music.  Or a display of working light switches.  Or a wall of gears which we didn't even take him to because we were afraid he'd never leave. 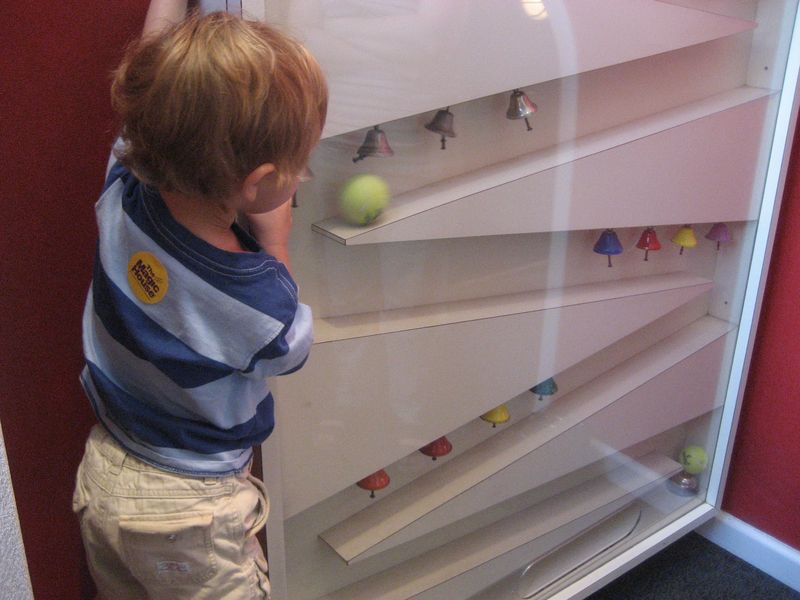 Plus there was an area of big blocks…

and a water area!  And, well, Kurt was in heaven.

It must have put him in a science-y mood, as he later on that night tried to put my shoes on, something I'd never seen him do… 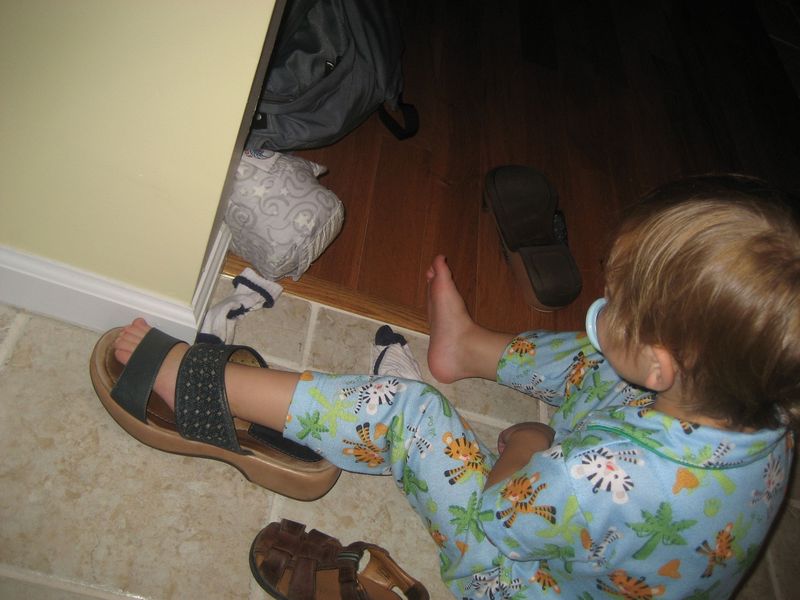 We are here for five and a half more days, and the New York Niehomes arrive tomorrow.  We are, then, having a blast, and we expect it to get better.

4 thoughts on “In Which We Vacate”