We had a sixteen week ultrasound last Friday and saw this: 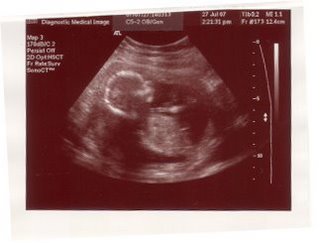 So, I guess there's really a baby in there. We don't know of it's a girl bean or a boy bean yet, but we might find out at the end of August. Jeff and I have argued about girl baby names since before we were married. These arguments generally consist of me proposing a name, say, Esther, and him saying "No." In the early years, he would actually make it a point of explaining why he hated the name. But lately, I'll say "Hey, Jeff, what do you think about Leilani?" and he'll just stare at me silently with expressionless eyes before turning back to what he's doing. When we first found out I was pregnant, I was trying to sell him on Lena, and it came out during this time that he didn't realize that Lena Horne is black. Since then he has managed to work Lena Horne and his knowledge of her blackness into casual conversations several times.

For a while we were both getting used to the idea of Greta, but I made the disastrous mistake of mentioning it to a couple of nurses I work with who are from the Philippines. "Greta" must mean batshit or its equivalent in Tagalog because those women seemed horrified that I would curse a child with that collection of syllables. So, should we land on a girl name we both fancy, and it turns out our bean is a girl, we may be keeping her name quiet for a while.

2 thoughts on “News of Bean”