The following image is not a photograph of microscopic bacteria. It's Ledbetter Beach in downtown Santa Barbara, and it's very, very foggy: 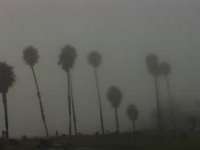 That's the beach that my school faces. Normally it's a killer view but today you couldn't see the ocean ten feet away from the water. Nor could you see your car from ten steps away. It was kinda spooky, and I figured it was a bad omen for my pediatrics skills re-test, but it just shows that I need to stop seeing normal weather patterns as omens because we passed with no problems. Afterwards I got a very sleepy Jeff out of bed and took him for breakfast at Cajun Kitchen. If his mother is reading this, I would just like to add a special note reminding her that this picture of his hair is pre-shower/pre-product, and yet still doesn't look that bad:

Jeff and I had a plague early this week and it may have been the result of a meal at our favorite BBQ place, which is a thought so horrible I hate to even contemplate it. A life without good BBQ is no life at all. The plague kept me out of clinical for a day, but I felt so much better by that evening I went out to the movies and Indian food. (The movie was Jet Li's Fearless. Official review: Meh. The central message of the movie is "China is cool." Or as Jeff put it, "China. Fuck, Yeah!" I'm not disputing the message. But to paraphrase Jonathon Katz, there are ways to say that without actually saying that. )

Later on that night I confessed to Jeff that it's possible I may be unraveling a bit as a human being. School, work, sleep deprivation, hormonal factors, and the fact that my mouth is full of steel hardware that is unapologetically yanking my teeth around are all combining in some magical way to turn me into Jayne, Official Spaz. Jeff expressed no surprise whatsoever. It turns out that I'm not the sort of girl who keeps everything bottled in and bears her pain and stress in strong silence. You can tell when I'm freaking out. Jeff told me to calm down, which is usually all it takes, unless I'm on an airplane in which case it also takes tons of liquor.

So, I am trying to be calm. I guess now that I'm near the end of nursing school I'm a little freaked out that something horrible will happen to screw it up. If you count the years I was thinking about going to nursing school and trying to build the courage to do so, this has been a ten year process. Jeff summed it up best, as he often does: "Well, you're about to succeed at something, and I know that doesn't sit very well with your personality." He makes a good point. I generally operate under the belief that anything good in my life is going to be balanced out with something awful, which is why I'm almost certain to be hit by a bus at any moment now. I generally prefer to be suffering as much as possible, just to be on the safe side.

I'm catching up on sleep today, but my sleep deprivation is not work related for once. Last night after Jeff cleaned the whole house Max and Danielle and Joel came over for wine and Fritos and cheese and games and we stayed up very late. It was worth it.