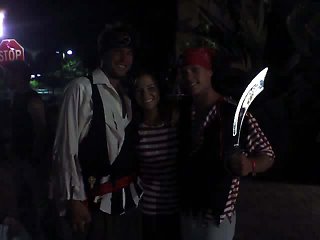 We went to the midnight showing of Pirates of the Caribbean last night. We bought tickets days in advance and got in line for seats an hour and fifteen minutes early. Are we geeky? Yes. Were we the geekiest people there? Not by a long shot. There were at least a hundred people there ahead of us, many of them dressed as pirates. The whole scene prompted Max to ask, misty-eyed, "What's happened to us? Do we not want it badly enough enough anymore?"

I don't know the particular pirates above. I was a little shy about asking them if I could take their picture, but Jeff pointed out that people who get dressed up as pirates for a night on the town are probably dying to have their picture taken, and he was so right.
Inside the theater, the crowd was spirited but mostly well behaved. There were many, many cries of "Arrrrh!" during the previews, but once the actual movie started they were fairly rapt, and thus quiet. And as for the movie itself? Despite Dana Steven's review, which had an overall tone of surprise that a movie based on a Disney ride might be crass, commercial and lacking depth (a pox on Dana Stevens!), I give it an A for Awesome.