As promised, my dad took me out for fish and to Point Defiance Park, a lush little piece of wilderness in northern Tacoma with a beach that was crowded with many, many pale doughy people looking to escape the unbearable "heat wave." Temperatures had reached the low eighties (gasp!) but of course no one was actually swimming because this is Washington and the water is cold as hell. Mostly they just huddled around it. 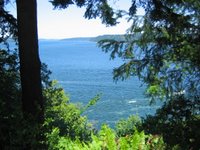 We traipsed around the woods asking ourselves what this or that plant might be, then did the long scenic drive through the park, stopping at vista points. Here's Dad looking outdoorsy.

And here's Mt. Rainier looking serenely like the ticking time bomb of death and destruction that it is.

So I had a good weekend, but as always it was very hard to leave my parents and I probably annoyed them with constant demands to go out and eat, take their picture, tell me about this and that. Pretty much what I do to Jeff, only he's used to it.
I took Rusty and Dad's picture together yesterday and Rusty announced beforehand that he wouldn't smile because he's decided to no longer smile in pictures. It's just a thing he has. So here is my one shot of him from the weekend. Rusty would be the serial killer standing next to Dad, followed by assorted random shots. 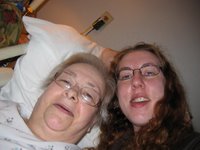 I think this is Beamer, on of the many kitties at Marty and Stephanie's house. I have to stop there at least once a trip for kitty love.

I woke up Dad at five this morning to say goodbye before I left for the airport, so this is a very sleepy Dad.