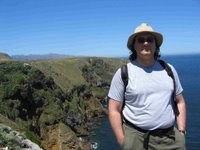 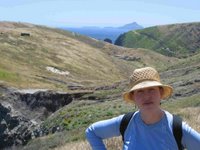 We finally went on our hike to Santa Cruz Island in the Channel Islands National Park. For once I was not the geek hurling everywhere. Instead I was the geek gripping the rail on the stern like grim death. And taking deep panic breaths, thinking about how my hiking gear would do me no good whatsoever once the boat overturned and I was forced to tread water for thirty seconds, which how long I can tread water, until I drown. But the point I want you to come away with is that there were people on this boat who puked and I was not one of them.

Even the crew admitted, grudgingly, that the water was a little violent. Jeff had a ball up on the bow riding the waves with the little kids who yelled woohoo every time it went airborne and crashed back into the sea.

The island itself was hot and windy and not terribly different from hiking at home except that there were panoramic views of an absurdly blue ocean at every turn and the occasional Chinese cargo ship suddenly appearing out of nowhere. We were on the island for six hours and hiked much more of that time than we didn't. 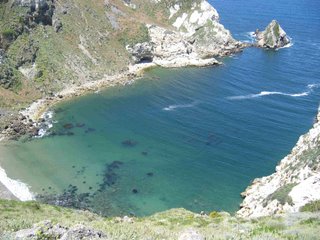 We were slightly dead afterwards. Evolution has selected me to exist best in a cozy apartment in a climatically temperate city with a Starbucks within biking distance. It's done much the same for Jeff except he also best exists in a place with no grasses or pollen anywhere within breathing distance. It's a miracle I ever leave the house at all. However, the boat we took came and went from Ventura harbor. Since we were in Ventura anyway we had to stop at Dairy Queen because we don't have one in our town and the rule is that when in a town with a DQ we must stop, no matter what the circumstances, even if we are in a funeral procession, we must stop. So we did. It was yummy.